Successful Marriage is the one where both the partners  work towards attaining the same goal… Every relationship starts with apprehensions and mistakes…. But some mistakes should be avoided to make your marriage a happy one

Here are 5 Mistakes that men make at the start of a Marriage….

This is the worst mistake a man makes…. She is NOT your Mother… She can’t be your Mother….She won’t be your mother…. PERIOD. Guys, Your wife has her own personality… She might not be a good cook… but she might be good at something else…. Both are the most important ladies in your life… but don’t try to intermingle their role and significance…  ( their Job description is totally different btw !!!) 😉

Yes… She lives with You now… but that does not mean you own her… She might want to enjoy her friends company… she might want to talk to her friends for hours even after marriage… don’t isolate her…. don’t make her loose her relationships… She is a human being just like you…..

3. Taking her for granted

Marriage does not mean you keep your wife as a trophy… don’t take her love for granted… show her that you love her back… don’t stop showing her that you care… women need to feel important and they want to be loved continuously….. She left her parents, her life, just for you…. don’t make her regret that decision…. !!! 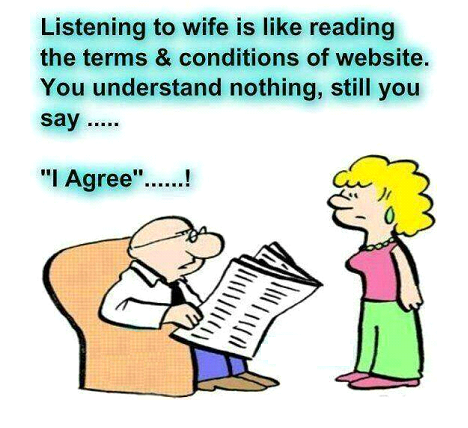 Guys, it’s pretty understandable that a joke is a joke… but it is a BIG mistake when you start sharing such jokes right after your marriage… You don’t know how much you hurt her…. it’s her lovey dovey phase… which will eventually pass, and she’ll understand you mean no harm… but hold your horses till then ….

5. Involving third party in your quarrels….

This is the worst you can do to your relationship…. No third person will ever be able to know what kind of bond you share with your better half…. and if you involve a third person, his/her mere words can have a long term affect on your marriage… Solve your problems as a couple… NEVER EVER discuss you wife with anyone else, be it your family or friends….

P.S : ‘Marriage is a sacred bond… both the parties have immense responsibility to make it work… and love each other in the best possible ways’